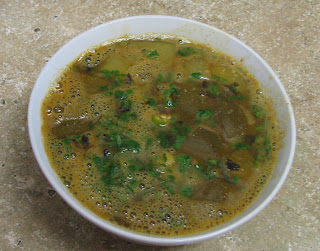 The best part of Indian Summers is feasting over  Mangoes, Raw Mangoes (kairi) and the wonderful delicacies made out of ripe or raw mangoes.The pickles, gulamba/moramba (mango jams) ,  panhe (home made soft drink made from raw mangoes) , aamras (mango purey) , amba barfi (sweet cake of mangoes) ..so on and so forth.Even though the mangoes in all forms vanish in India around first week of June,one finds mangoes (raw & ripe mexican ones) all throught the year in this part of the US. A visit to the grocer's answered my riddle regarding the recipe for next blog post.

Found some fresh and appealing raw mangoes at Wolfe India Bazaar @ Sunnyvale and decided to pick up the recipe for "Kairiche Saar" (raw mango soup). Its a sweet & sour soup,extremely appetizing on the lines of "Rassam" served at most of the South Indian joints.A typical maharashtrian would have a piping hot bowl of Kairiche saar with hot steam rice and papad by the side. 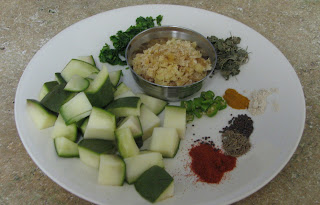 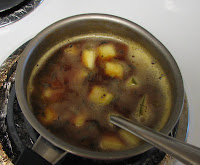 I used a small,open faced deep saucepan to prepare the Saar.After chopping the raw mango into square chunks, I put the pan on medium flame.I used cooking spray instead of oil to minimize the calorie score.The cumin and mustard seeds were dashed in and crackled in no time. Asafoetida ,turmeric powder , curry leaves (if you add them) ,kasuri methi and chilies were queued one after the other to the saucepan.The raw mango chunks need to be cooked thoroughly.The "kairi" looked amazing and i pushed them into the "tadka" prepared in the pan.I wanted a thicker version of soup,so added only 4 muffin full bowls of boiling water to it.The mangoes took the heat for about 5-7 minutes.Just after the mangoes were cooked,I added jaggery,salt,red chili powder.We prefer it really spicy,so added a little extra red chili powder.I used few tsps of hot water to make paste of cheakpea flour (emulsion).I added it to the Saar .Besan/chick pea flour helps thickening the soup and could be replaced with corn flour.

The aroma was tantalizing, unable to control the want to sip it , I hastily put a soup spoon into it and enjoyed the first burns of soup on my tongue! It turned out pretty well though.I personally feel that the raw mangoes in US aren't very sour.So added some amchur powder to it (instead a fresh lemon could be squeezed in too ; but the lemons are merely juicy and not very sour) .However,its about taste and choices.My mother never can gulp down this soup without being tamed by excess of jaggery or sugar.But,i can eat even the sourest of Indian raw mangoes with pleasure.

The final touches just before dinner time is announced,garnish with freshly chopped coriander or cilantro.

Diwali is celebrated all over India majorly for 3 days.In Maharashtra,it spans over larger period starting from "Vasu Baras" to "Tulshi che lagna".Its a joy ride all the way and people shop,eat and burst crackers to the fullest during this festival of lights."Kairiche saar" could be a good American input for celebrating divali here.Most of my fellow NRI's would agree that there's something to envy our homeland folks too!

Btw,tomorrow's a special day,so it would be Samosas on the Tray! :)

Posted by thefloweringcactus at 6:43 PM

Promote Your Page Too

Ratings and Recommendations by outbrain